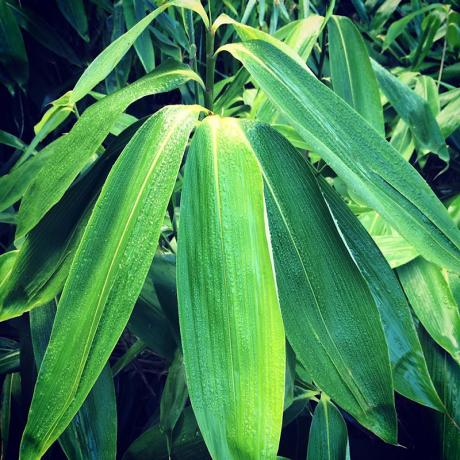 OUT OF STOCK MORE SUMMER 2021
Palm Leaf Bamboo - A very exotic looking bamboo due to its very large palm like leaves.

This is one of the first hardy bamboos we planted in our garden (to get instant tropical effect!) and we have been smitten ever since.

The Sasa Palmata is known for its tropical appearance, thanks to its broad green leaves, which have a blue-green glow when seen against the sunlight.

Canes are green mottled with brown-black markings. During heavy snow the canes have been known to bend completely to the ground due to the weight. However, when the snow thaws the canes simply rise back to their former height.

This plant spreads slowly at first but is eventually invasive. If you do not have room for it in the ground it is a must planted in a container or with a rhizome barrier

CLICK HERE FOR YOUR GUIDE TO CHOOSING THE RIGHT BAMBOO

This is the basket Message

This is the basket Message